A perfect beginning. I may have read this entirely because of the first few pages. Let me be clear up front; I didn’t understand this novel but could hardly put it down. I read the opening once and then slipped it back onto the bookshelf when my book club considered reading it. (I hate reading books too early and forgetting important parts.) But I couldn’t stop thinking about the beginning.

10% and I can’t believe I skipped this little. After all, I DNF Middlesex for Greek detail.

English majors, Greek Mythology lovers, attention-to-detail readers. This is the most perplexing question for this book as I have no idea why I couldn’t put it down.

Summary:          Richard Papen works his way into the classes of college instructor Julian Morrow at a small Vermont College. There he befriends, Henry, Bunny, Francis, and twins Camille and Charles. Morrow teaches them about Greek bacchanalia and/or the Dionysian Mysteries (which I admit, proudly, I had to look up and am not sure I even placed in the sentence properly.) These teachings have, before Richard enters the class, inspired the members of that odd group to make a sacrificial murder—which leads to a second murder.

That second murder is of one of its own—Bunny. No spoiler here. This secret is told upfront, which may be part of the reason I could not put the book down. The entire novel has to do with how they lived after Bunny’s murder.

Characters:        The bizarreness of these characters superseded any dislike I had for them. I wanted, needed, to hear more. Maybe their behavior flabbergasted me. Here are the characters in preference order:

Bunny – If I came close to liking a character, it was Bunny. Somewhere, I’m sure there is a psychologist, possibly of Greek descent, clumping personalities of people who read this novel into flawed groups depending on who their favorite Secret History character was. Bunny’s character goes so against my grain I found myself cheering for him. He’s a fake, uncaring, and relies on the favors of friends to get through life to a point of exasperation.  But he is also a cheery bloke you can’t help find yourself smiling over when he works his way onto a page. I couldn’t wait to see what he would do next.

Camille – Everyone loves Camille, including her brother—a little too much. Yet Camille is not enamored by anyone. She has an admiration for Henry, who is their mysterious, well-read, gardening leader.

Henry – I like Henry more than Richard because, like the characters in the book, I was drawn to his strange, independent mentality. He seemed to think himself Greek God-like. He has lots of money and is the master manipulator of the group. Henry calls the shots.

Richard – Dull and boring, but it reminded me of—was it Daisy’s cousin?—the narrator in The Great Gatsby. Richard is the newcomer to the group. For lack of a better word, he’s detached. He seldom shows emotion, yet he is unwaveringly loyal to the group.

Francis and Charles – I can’t decide the order. They were the most insecure of the group. Alcoholics (although they all probably were). Sometimes gay, sometimes not, with Charles having an incestuous spark. I liked them less and less as the book went on. For a while, I experienced a soft spot for Francis, but that washed away toward the end. Simply, I have no idea why these were my two least favorite characters. I almost lumped Richard with them and might have had I not been astounded by his detached nature. I’m sure there is some flaw deep down inside me for liking these two the least.

Storyline:            I’ll be frank. I didn’t understand it. If I were younger, taking this for a class, or not ADHD, I’d google this book and delve into Greek Mythology, or story, whichever needed, and search for meaning. But I’m old and the ship sailing toward old Greece (remember? I didn’t finish Middlesex) left the docks a long time ago.

Still. I’m rating this a four because I simply couldn’t stop reading THE STORY, which highlights a character, whom I didn’t like, and his life before and after Bunny’s murder. His life was mundane afterward. I kept thinking, really? You’re going to sit and read?

See what I mean? Confusing.

Writing:              Superb. I highlighted quotes and will use some. Already have. While Tartt’s attention to detail was too intense for me, she does command a reader’s attention by a sweet rhythm of words.

Read this author again? I’m not sure. Because she is such a good writer, I’m willing to try. I’m not sure the story of The Goldfinch will be enough to keep me reading and skipping past the detail as this one did. I’ll let you know.

CJ Zahner is the author of The Suicide Gene, a psychological thriller, and Dream Wide Awake and Project Dream, two thrillers that carry a paranormal element. These last two novels were inspired by Zahner’s own experiences. See the video of her own paranormal experience, a premonition of 9/11 here. Download her Beyond Reality Radio podcast here. Follow her on Instagram, Twitter, Facebook, Goodreads, BookBub, or LinkedIn. Purchase her books on Amazon. 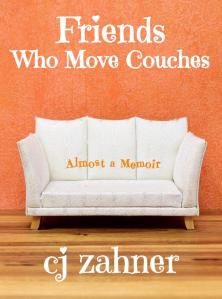 Nikki Grey’s idea of living dangerously is not wearing a seat belt, yet calamity always seems to find her.

This is a story of love, laughter, family, friends—and surviving rejection.

Nikki Grey suffers from epilepsy, but she worries more about friendship skirmishes than her health.

Married to a workaholic and the mother of three rebellious children, she forgets her problems one afternoon, smokes marijuana, and has a grand mal seizure. She loses her driver’s license and becomes imprisoned in her home, staring out the window at the neighborhood women who have ostracized her.

Her true friends encourage her to concentrate on herself, but Nikki is her own nemesis. She embarks on a plan to win neighborhood friends back and instead becomes the butt of their jokes. Her ache for their friendship escalates.

Not until her two-timing husband asks her a question that catapults her frivolous suburban life into a tailspin, is she forced to stop relying on others and stand on her own.

Friends Who Move Couches is a story for all women.