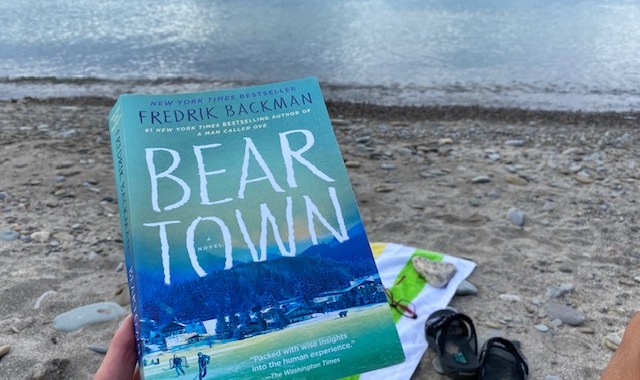 General Rating:  A hat trick! This is the third ten I’ve given Fredrik Backman. Appropriately, it’s a hockey story. Backman keeps outdoing himself.

Skip factor:  Another one where I skipped nothing. Not a word.

Favorite line: “It doesn’t take a lot to be able to let go of your child. It takes everything.”

Who should read:  Anyone—especially members of athletic families.

Summary: People in Beartown live and breathe hockey, so when the deteriorating little town realizes their junior ice hockey team has the talent to win the national semi-finals, residents experience a sense of revival. Then tragedy strikes. One of the team’s members is accused of a violent act. And it isn’t just any team member. It is the best player and son of the team’s biggest sponsor.

This isn’t simply a story about hockey. It’s the story of a town, of friendship, of right and wrong. Quietly, Beartown highlights the differences between being raised female versus male. And loudly, it touches the subject of worshipping male athletes to a point where some people allow the line between right and wrong to fade.

This book makes a reader question love and loyalty. When is it good? And when is it errant?

Characters:  He’s done it again, had me loving multiple characters. Before I reached page 127, I knew I would rate this book a ten. But on that page, when Kira says, “Oh Fatima, I should be asking if I could sit next to you,” I realized Backman had me falling in love with characters all over again. Like a repeat of A Man Called Ove and Anxious People, one by one they captured my heart.

All of Beartown’s characters are quirky, interesting, and deep. I loved Maya, Ana, Sune, and Benji from their introductions. I fell head-over-heels for Ramona on page 352 and Amat on page 353. Then as if I wasn’t close enough to the end and all out of affection, I fell in love with Bobo on page 374, and Jeanette and Adri on 393 and 394.

There were other characters who had defining moments, like Tails and Kira. You’ll love the masses.

Writing:  The writing is magnificent. Backman’s writing in A Man Called Ove and Anxious People was wonderful, but this book? He’s outdone himself. Never say this author can’t write a better book. He keeps turning them out.

Read this author again?  Absolutely. I am patiently awaiting the arrival of Us Against You and Britt-Marie was Here.  And since I’m a digital-book junkie, you know it’s my favorite author when I order a paperback. They’ll be dog-eared, highlighted, and worn from use.

CJ Zahner is the author of The Suicide Gene, a psychological thriller, Dream Wide Awake, and Project Dream, two thrillers that carry a sixth-sense paranormal element, and two ChickLit novels Friends Who Move Couches and Don’t Mind Me, I Came with the House. Many of her novels were inspired by Zahner’s own experiences. Download her Beyond Reality Radio podcast here. 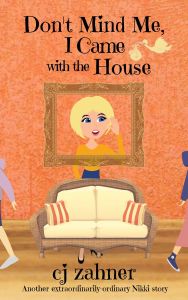 Don’t Mind Me, I Came with the House

A story of love, forgiveness, and accepting yourself as you are—faults and all.

Recently divorced and juggling an accounting job with an after-five life as her kids’ maid, Nikki’s luck suddenly changes when a popular golf pro, Blake Andersen, falls in love with her. She’s offered a CFO position at work, her kids release the death-like grip they have on her life, and she spends weekends traveling the glamorous US golf circuit with Blake the Pro.

But when female problems surface in her forty-seven-year-old body, she’s certain illness will dash her future.

Then she gets the news. She’s not dying—she’s pregnant.

Dumbfounded, demoralized, and determined not to force Blake into marriage, she vows to keep her pregnancy secret until he proposes. Her bungling efforts catapult her into online sensationalism.

Careful what you wish for.