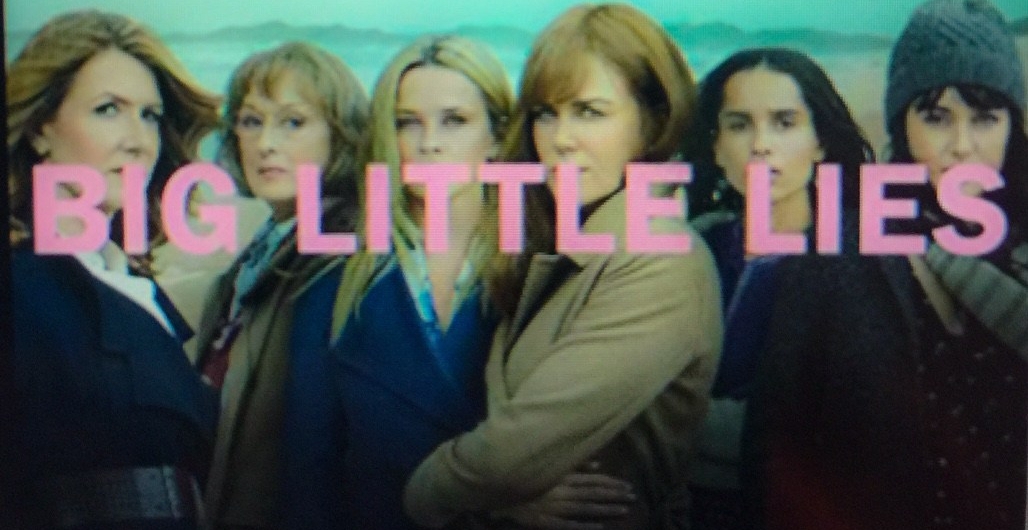 This was a can’t-put-down novel for me. Confession: Not sure I would have LOVED this book as much if I hadn’t watched the Netflix series. Reese Wetherspoon’s voice echoed through my head with the turn of every page. (I love that girl.)

O% This doesn’t happen very often, but I skipped nothing. Not one word.

Anyone who has watched the series. Women who are in their own heads too much. (You’ll identify with Maddie.) Mothers with angry teenage daughters. Rumor mongers. Women who are bored and need to spice up their life. (I say boring is good. This novel spiced up my dull little life.) Mothers who share custody of their children…oh, forget it, let’s say all women…

Summary:  I’ll attempt brevity. Jane, a single mom, enrolls her son, Ziggy, in Pirriwee School. There she meets Madeline, a head-strong, thinks-too-much, underdog-defending mother of three. Madeline takes Jane under her wing and the two of them, along with Madeline’s best friend, Celeste, take up arms when another mother, Renata, accuses Ziggy of bullying her daughter.

Celest is rich and beautiful but married to an abusive husband. Madeline is married to a good guy, but her ex-husband and his much-younger wife have moved into the Pirriwee school district. They inadvertently flaunt their life in Madeline’s face. Madeline, bitter because her ex-husband left her when her now teenage daughter was a baby, becomes outraged when that daughter opts to live with him.

The disturbing crux of this novel is Ziggy is the result of Jane’s one-night-stand turned rape. She has returned to the scene of the crime, the Pirriwee area, in hopes of finding and confronting Ziggy’s biological father.

I won’t say more than that about the story, so I don’t spoil it. I truly want you to read this one.

Here are three of the main characters whom Moriarty creates and whom I loved:

Storyline: Early on, the author lets you know there will be a death at a Pirriwee school function. The story unfolds through the eyes of Madeline, Jane, and Celeste. Each has their own storyline. In each chapter, Moriarty includes brief transcripts of police interviews of other school parents. Some are hilarious. Some reveal more of the back story until everything unfolds at the event.

Writing style:    The writing was superb. Moriarty has a way of allowing the readers to see past Madeline’s pettiness and take her side. Pacing was excellent. I loved the dialogue, and again, the police interviews were brief and entertaining. Evoked suspicion and interest. Perfect. Felt as if I was right there at Pirriwee school, standing beside Madeline.

Read this author again: Absolutely. Already did. See my 4-star review of The Hypnotist’s Love Story. I fully intend on reading everything Moriarty writes.

CJ Zahner is the author of The Suicide Gene, a psychological thriller, and Dream Wide Awake and Project Dream, two thrillers that carry a paranormal element. These last two novels were inspired by Zahner’s own experiences. See the video of her own paranormal experience, a premonition of 9/11 here. Follow her on Instagram, Twitter, Facebook, Goodreads, BookBub, or LinkedIn. Purchase her books on Amazon.